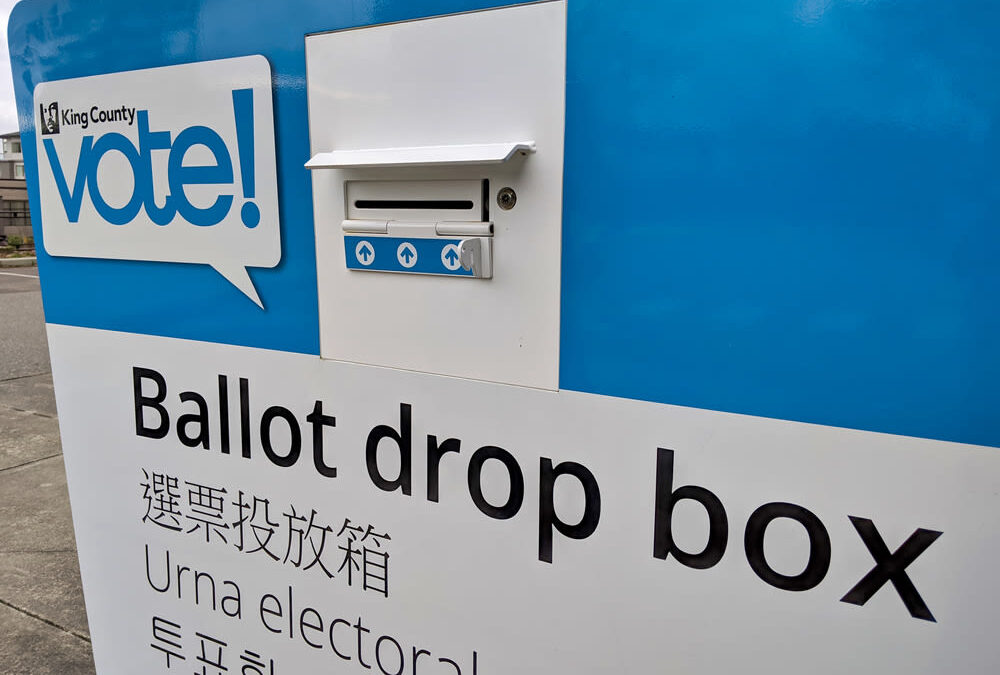 Last month we shared an overview of Juneteenth with a timeline of major events from the Civil War to present, and a post on two interrelated systems that propagate racism: voter suppression and mass incarceration. We encourage you to honor Juneteenth and the people that have fought for equal freedom, rights, and enfranchisement by exercising your right to vote during the 2021 election. Many of the offices and issues on the ballot this year will have long-term impact on the people of Washington state and will directly affect the criminal legal system.

Elections in odd-numbered years, also called “off-year elections,” see important local contests for statewide, county, and city-level offices and measures. Historically, elections in odd-numbered years see less participation than even years in Washington state. Voter turnout in even years has averaged 73.58% since 2010. Odd years have averaged 44.98% voter turnout since 2009. Lower participation in odd years belies the importance and impact of local elections. Matthew Gross writes in The Harvard Political Review, “The stakes of local elections might not be as widely reflected in the media as they are about the Presidential Election, but local elections have real consequences.” The election in Washington state on November 2, 2021, is no exception. This year’s offices and seats will have wide-reaching impacts on day-to-day life in Washington.

Learn about what you’ll see on the ballot this year and make a plan to vote. Here is more information about the important offices up for election, with an emphasis on those that legislate on, manage, or influence the criminal legal system.

In addition to other responsibilities, the Seattle Mayor:

Mayor Jenny Durkan has announced she is not running for another term, so a new Seattle mayor will be elected on November 2, 2021 with the ability to impact issues on affordability, equity, safety and mobility for the city. Lorena González and Bruce Harrell advanced from the primary on August 3, to run in the general election for mayor of Seattle on November 2, 2021. For more information on each candidates policy stances, see their answers to a series of yes-or-no questions asked during the primary.

As the city’s primary legislative body, the council establishes city policy through enactment of laws and adoption of resolutions. The drafting of city legislation typically begins with committees. The Public Safety & Human Services committee provides policy direction and oversight relating to issues including the criminal legal system, law enforcement, and police accountability. One of the two members up for election this year is the Council President and vice-chair of this committee.

Two at-large seats are up for election in November. Teresa Mosqueda, incumbent for Position 8 secured 59.4% of the vote in the primary and will run against Kenneth Wison on November 2. Position 9 is also up, as the incumbent, Lorena González is running for mayor. Nikitta Oliver and Sara Nelson advanced from the primary with 40.2% and 39.5% of the vote, respectively.

The Office of the Seattle City Attorney is one of the largest law offices in Seattle, with more than 100 attorneys. It is composed of three divisions: the Criminal Division, the Civil Division and the Administrative Division.

This division also has responsibility to develop policies relating to the management of the criminal legal system including jail administration, sentencing guidelines, diversion programs, and municipal court procedures.

Pete Holmes, the current City Attorney, conceded the primary election after running for a fourth term,  The race is now in between two new candidates with opposing viewpoints.

An initiative passed in 2020 makes King County the only county in the state and one of the few across the country to appoint the sheriff.

Incumbent Dow Constantine will run against Joe Nguyen for the position in November’s general election.

As the legislative branch of county government, the Council sets policies, enacts laws, and adopts budgets that guide an array of services, including:

The council largely functions through the work of its standing and regional committees. One of the standing committees focuses on “Law & Justice” and makes recommendations on policy impacting the criminal legal system including:

Five of ten seats on the King County Council are up for election this year. Three of the members running comprise half of the current Law & Justice committee.

Tacoma employs a Council-Manager system. In addition to speaking for both the government and community of Tacoma, the mayor is the presiding officer and regular member of the City Council.

Incumbent Victoria Woodards is running for re-election. She secured 51.82% of the vote during the August primary and will run against Steve Haverly on November 2. Prior to her election to Mayor in 2018, she served for seven years as an at-large member of the City Council.

In addition to the mayor’s seat on the council, four other seats – one at-large and districts two, four and five – are up for election this year. The only incumbent council member running is Catherine Ushka in District 4.

In Olympia, the mayor is elected to Position 1 on the city council. The mayor and the council have equal voting authority. Five of the seven seats on the Olympia City Council are up for election this year. Incumbents are running for all but one of the seats in November.

This November 2, there are key offices up for election and issues facing voters that will affect everyone in Washington state. Offices responsible for legislating on bail reform, public defenders and alternatives to jail; appointing the King County Sheriff; or ruling on bail and sentencing, will directly impact people accused of a crime. As Gross writes, “There is no trade-off between learning about federal elections and local elections, and, as such, people should take the time to become informed about their local elections. Local elections have important consequences and voters should not dismiss them.”

Your vote makes a difference, especially in local elections. Big decisions are being made in our state this year and we encourage you to exercise your right to vote and make your voice heard.

Make a plan to vote in the primary on August 3 and the general election on November 2, 2021. Here are some resources to make sure you’re registered: