We can’t stop now: The fight for systemic change 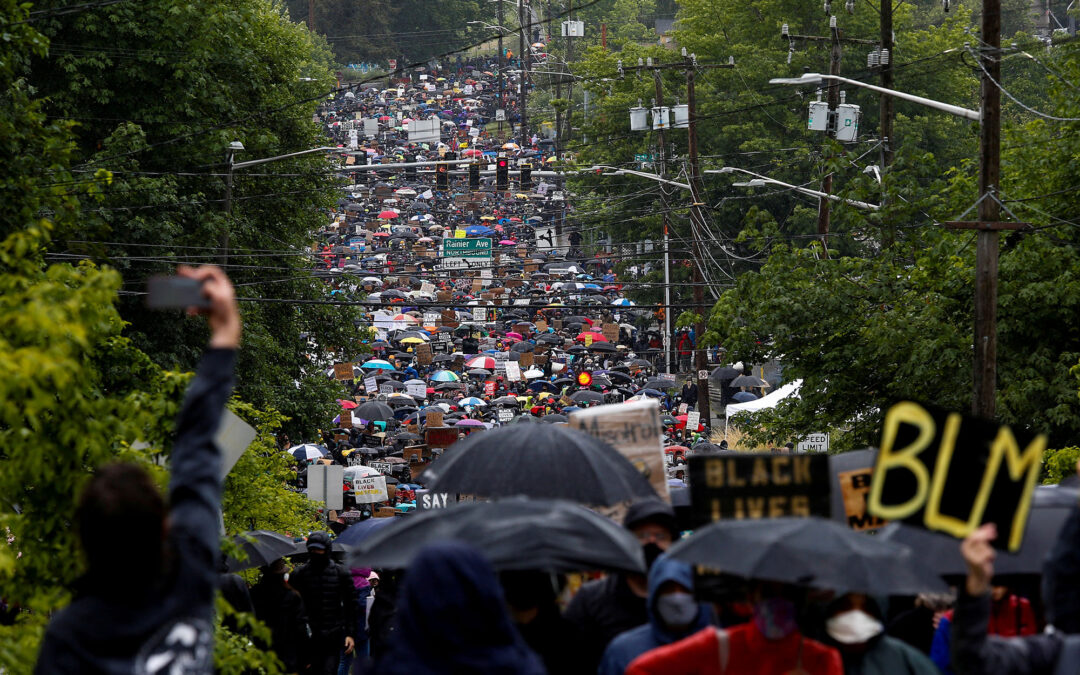 The murder of George Floyd by four police officers in May 2020 triggered civic unrest in America at a scale not seen since the assassination of Martin Luther King Jr. in 1968. The resulting uprisings brought renewed and increased awareness to issues with policing, courts and detention faced by people accused of crimes in the United States. To quantify the increased attention: Northwest Community Bail Fund saw a 202% increase in donations between 2019 and 2020.

Politicians and citizens alike were pushing for changes, and calls to “Defund the Police” were widespread. In 2021, Washington state passed laws establishing new use-of-force standards for police and limiting the use of certain tactics, such as high-speed vehicle pursuits. But more recently, claims of increased crime nationwide, the election of a tough-on-crime, pro-police Seattle City Attorney, and the newly elected Seattle mayor pushing back on police budget cuts may slow the progress. Early this year, new legislation was passed that both clarifies and in some cases, curtails last year’s laws.

It’s an important time to revisit what systemic change and defunding the police means and why it’s necessary for healthy and just communities.

Racism in the criminal punishment system

Nationwide, practices of policing, prosecution and detention involve issues that have existed and been documented since the beginning of policing and the use of penitentiaries. In a profile about abolitionist Ruth Wilson Gilmore, Rachel Kushner writes, “Critics have been asking whether prisons themselves were the best solutions to social problems since the birth of the penitentiary system.”

Detention began to be used as a punishment in the U.S. around the end of the 18th century. Previously, prison was used to detain people only until the punishment – typically corporal and public, and often fatal – could be delivered. Detention as punishment was seen as more humane than torture and killing, with the goal being rehabilitation.

Because the point of detention was to deny people their usual rights, prisoners were mostly white males until after the Civil War. When the 13th Amendment was ratified in 1865, slave codes transitioned to “Black codes” – laws adopted in Southern states to take advantage of the language in the 13th Amendment allowing for slavery or involuntary servitude “as punishment for a crime.” Unwilling to forgo the billions of dollars in free labor that slavery had provided, Southern leaders allowed Black people to be criminalized for things like homelessness, loitering, or insulting gestures or language, resulting in detention and forced labor at no cost. It shouldn’t be surprising that charges against Black people at times were fabricated entirely.

The bias and imbalance established over 200 years ago since the beginning of detention as punishment has continued. Khalil Gibran Muhammed writes in The Condemnation of Blackness, “In the aftermath of wide-scale racial violence during the Great Migration of Black southerners to the urban North, African-American researchers in the 1920s published a flurry of new statistical reports of racism among police officers, prosecutors, and court and prison officials.”

Today’s criminal legal system was built on systems and beliefs in which racism and classism are inherent. And to this day, the punishment system in the United States criminalizes the poor and people of color. As scholar, writer and activist Angela Y. Davis wrote in Are Prison’s Obsolete? in 2003, “Particularly in the United States, race has always played a central role in constructing presumptions of criminality.”

As a result, police arrest, injure and kill people of color more, prosecutors charge them more often and harshly, and judges give them longer sentences.

Alex Altman writes in Time Magazine that “A black person is killed by a police officer in America at the rate of more than one every other day,” and “Since 2015, Minneapolis police have rendered people unconscious with neck restraints like the one Chauvin applied to Floyd at least 44 times, according to an NBC News analysis; in three-fifths of those cases, the subject was black.”

According to the database MappingPoliceViolence.org, Black Americans are almost 3 times more likely to be killed by police than white people. Here in Washington state, it’s 3.8 times.

Regardless of the intentions of those participating in policing today, history and data show that a system built on racism will continue to result in racist outcomes. Criminalizing people of color is an endless cycle of oppression that doesn’t decrease or prevent crime.

The risk to citizens living with a mental illness in police interactions is also very high. A 2015 study by the Treatment Advocacy Center found that people with a mental illness are 16 times more likely to be killed during a police encounter than other civilians approached or stopped by law enforcement. Severe mental illness is an identifiable factor in at least 25% of all fatal law enforcement encounters, though that number is almost certainly underestimated due to a lack of accurate reporting.

A Bureau of Justice Statistics survey in 2011-2012 found that 37% of people in prison and 44% of people in jail have a history of a mental illness diagnosis. 26% of people in jail and 14% of people in prison met the threshold for serious psychological distress in the 30 days prior to the survey. A 2017 survey by Families Against Mandatory Minimums of people in federal prisons found more than two-thirds of respondents said they had not received mental or behavioral health treatment in federal prison. Arrest and detention is not a treatment. Instead, it locks those living with a mental illness into a cycle of arrest, detention and release without any improvement in the underlying illness. Instead, it often has the opposite effect and further diminishes their mental state.

Episodes of Seattle officers using force and escalating situations, particularly in encounters with people with a mental illness, resulted in a 2011 Justice Department investigation and the Seattle Police Department was placed under a federal consent decree in 2012.

Steps taken by state lawmakers to further address these issues include legislation passed in May 2021, E2SHB 1477, that adds to federal law giving more access to suicide prevention and behavioral health support during a crisis and to divert individuals from actions like calling 9-1-1, which typically results in a response from law enforcement, who are not best suited to meet their needs.

Other cities or municipalities have found solutions to address this need through civilian mobile crisis intervention, like CAHOOTS (Crisis Assistance Helping Out on the Streets) in Eugene and Springfield, Oregon. CAHOOTS provides 24/7 response dispatched through the Eugene police-fire-ambulance communications center. Each response team includes a medic (either a nurse or an EMT) and a crisis worker with at least several years of experience in the mental health field. These teams provide services like crisis counseling; suicide prevention, assessment, and intervention; conflict resolution and mediation; and housing support. The service is voluntary, confidential, free of charge, and understandably, much better prepared and skilled to respond to non-criminal crisis situations such as homelessness, intoxication or disorientation, mental illness, and substance abuse, than law enforcement.

According to Nazish Dholakia in “What Happens When We Send Mental Health Providers Instead of Police”, CAHOOTS “…saves Eugene $14 million annually in ambulance and emergency room costs, plus an estimated $8.5 million in public safety costs – and has successfully diverted thousands from the criminal legal system.”

Seattle public safety agencies announced in July of 2021, a plan to develop a new unit, currently called Triage One, of unarmed teams to respond to crisis calls that don’t involve a medical emergency or criminal activity. The Seattle City Council allocated $1.9 million of their 2022 budget to Triage One, and since his election, Mayor Harrell has expressed interest in launching the program.

Another way to keep people accused of crimes from being overwhelmed by the criminal legal system and in a position to better defend themselves is provided by bail funds nationwide. Bail funds pay bail for people who would otherwise spend pretrial time in jail while awaiting routine court appearances or buying bail from bonds companies that bury them in interest and debt. This time can cause loss of employment, income, health, housing and the ability to care for children or other family. Northwest Community Bail Fund (NCBF) is dedicated to ending cash bail and pretrial detention in Washington state because they harm communities, are racist, classist, transphobic and ableist. On a larger scale, NCBF advocates for systemic change, defunding the police is part of that change.

Why we need to Re-Ignite the Fight

Defunding the police refers to reallocating or redirecting the extraordinary funding devoted to policing to other organizations or services built to reduce crime and police violence. At the time of the report from the SPD Functional Analysis Interdepartmental Team (IDT) the city was looking at opportunities to instead fund programs to provide youth violence prevention, youth employment, homeless outreach services, affordable housing, and mental health resources. The IDT itself stated that “SPD patrol officers are often ill-equipped to help residents make connections to these resources.” Said another way, patrolling and arresting the young and poor, homeless, or those with a mental illness is not a solution. Armed law enforcement isn’t necessary in all the situations into which they’re called. A study of 9-1-1 calls executed under Mayor Jenny Durkan’s Executive Order to Reimagine Policing and Community Safety in Seattle found that almost half of the 9-1-1 calls that come in do not require sworn, armed officer response due to call type, frequency of arrest, and alignment with criminal code.

Unfortunately, current announced plans from Seattle’s leaders to increase policing and charges for low-level crimes revisit failed past policies. City Attorney Ann Davison announced on March 15 a plan to target “high utilizers of the criminal justice system,” similar to plans from 2012 and 2019, also championed by Deputy City Attorney Scott Lindsay, who served as a public safety advisor to Ed Murray in 2019. Experts in public defense argue that arrest, prosecution and jail clearly aren’t solutions and hope for an increase in support of diversion programs like LEAD (Law Enforcement Assisted Diversion) to support this initiative.

Civic leaders, policymakers and elected officials must make real community-centered investments in housing, mental health resources, healthcare, healing and trauma services, education, employment and economic opportunity over more funding for policing jails and prisons to solve social problems. These issues and the impact on the people they affect are huge. Change takes time, but keeping the ultimate goal in mind – implementing restorative and transformative justice – is the key.