Bail has its origins more than 1500 years ago in what is present day England. During that period, Anglo-Saxons shifted away from the Germanic tribal approach of physically violent retribution to a crime. This was replaced with payments (goods or money) that were paid to the victim, victim’s family or to the monarch.

Following this period, in the late 600s ‘borh’ or ‘bail’ was created. The purpose was to make sure people attended court and the payments were intended to allow people their freedom pretrial, and only face prison if found guilty. Borh could be property, money, friends and/or family who would take on paying the borh if the accused did not. If someone didn’t have borh, they had to stay in jail. 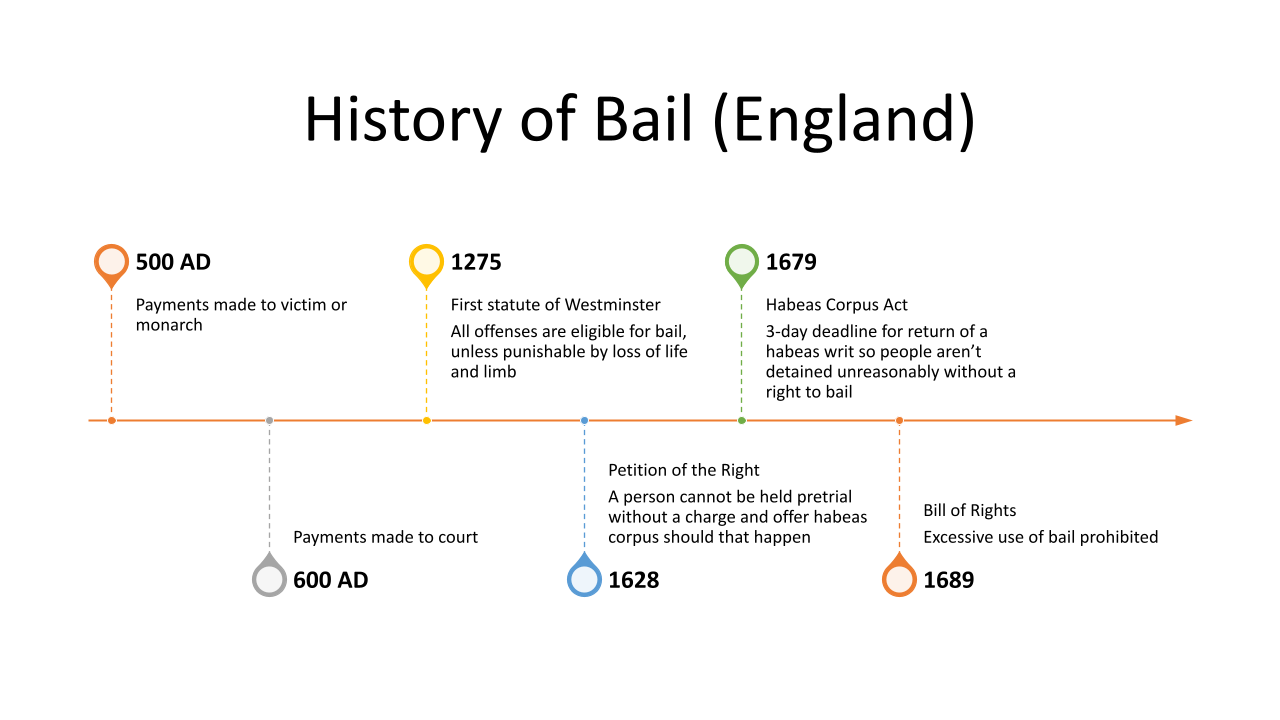 Between 1275 and 1689, various laws were passed in England that evolved from earlier primitive practices of payment as retribution to something that was reasonable and not prone to misuse. Refer to Figure 1 for some of the milestones during this period.

In the US, the First Continental Congress of 1774 brought together delegates from twelve of Britain’s thirteen American colonies. They met to discuss America’s future under growing British aggression. One of the outcomes was the Northwest Ordinance of 1787 that among other provisions included a guarantee for the right to bail to every accused person except those charged with a capital crime or contempt in open court. The Declaration of Independence in 1779 was followed by the drafting of the constitution in 1789. This was followed by a similar evolution of the practice of bail as in England starting with the Eighth amendment to the Constitution, followed by the Judiciary Act that was similar to England’s Westminster Act, that was later revised through the 1878 statues and a Supreme court ruling in 1951. The detailed milestones are illustrated in Figure 2. 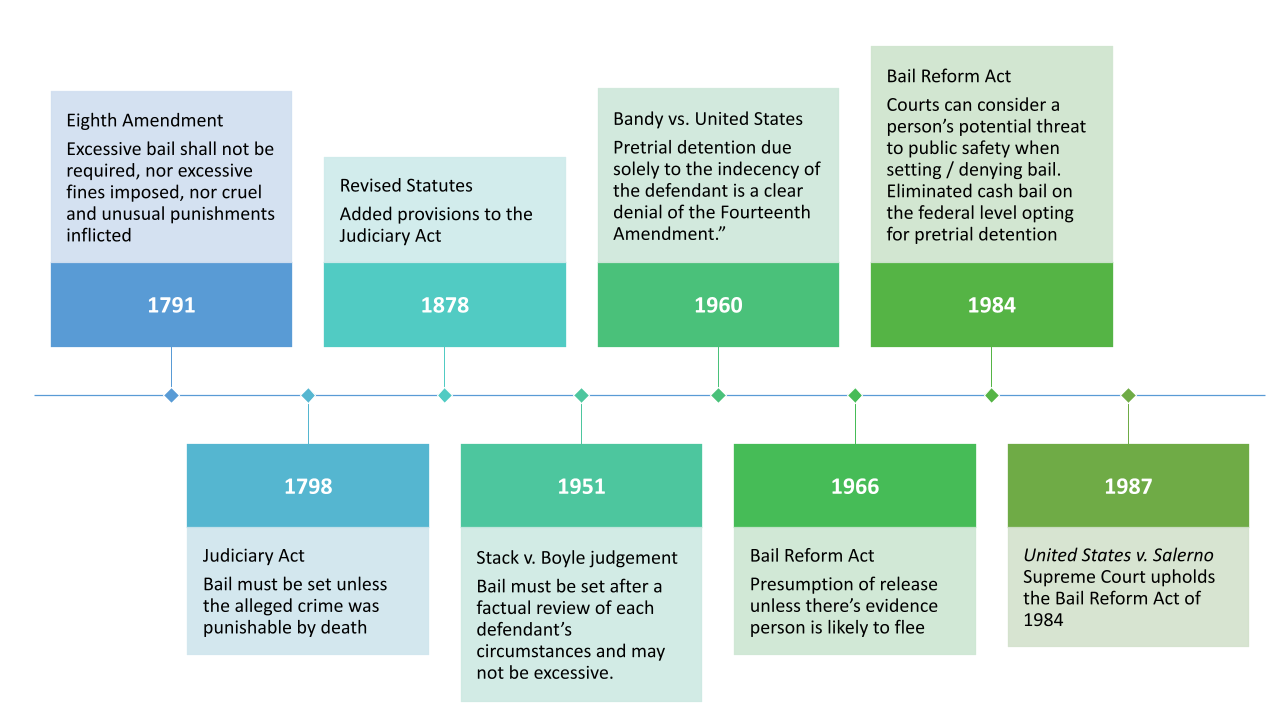 You can read the specific wording of Washington’s state bail rule here. In summary, at a defendant’s first appearance, the judge must set bail unless it is determined that bail will not incentivize the defendant to attend later dates, or there is a strong likelihood that the defendant will commit a violent crime and/or interfere with the case. Bail will not be set if the judge deems either of those conditions met.

In addition, Washington Courts addressing bail have said: “The State is not primarily interested in collecting bond forfeitures but is more concerned with granting liberty to an accused pending trial while obtaining the greatest possible assurance that he will appear.” –State v. Barton, 331 P.3d 50 – Wash: Supreme Court 2014. Essentially, the state of Washington is more worried about creating an incentive for people to return to court than it is about taking money from its populace.

In the current bail system, a bail amount is determined by the court to ensure the return of the defendant for trial. Bail is released by the court once the defendant’s obligation to appear is met. The court can keep the money if the court appointment is missed. In other words, the bail money is forfeited if the defendant does not show up in court at the assigned appointment also commonly referred to as Failure to Appear (FTA). The process is illustrated in Figure 3.

However, in practice, cash or money bail creates a dual system of criminal punishment. It allows for release for people who can afford bail and increased pressure for those who can’t. People who can’t afford bail must often choose between staying in jail to fight their case, potentially risking losing housing, jobs, custody of children etc. or pleading guilty to get out and go home.

If the defendant misses court, bail bond agencies may involve bounty hunters to track people down and collect their money.

Bail Funds differ from bail bonds in that they provide cash bail for marginalized people who are unable to afford bail. They pay the full bail amount directly to the court. There is no financial requirement for the person on whose behalf the bail fund is paying the court.

Communities have long come together to care for community members when caught up in the criminal-legal trap of accusations, pre-trial detention, and pressured plea deals. Often, even working together, communities or community based organizations struggle to meet the cash demands set by the court. Bail funds have been around since the 1920s when The American Civil Liberties Union (ACLU) first established it, and it evolved through the century into the 2000s into various  models of public-private partnership. The details of this evolution are available below in Figure 4.

The first Bail Reform Act was passed in the 1960s. Notably, the Mississippi Bail Loan Fund was created with the Student Non-Violent Coordinating Committee (SNCC). Hundreds of other funds were created as one-time bail outs for one person, such as Eldridge Cleaver, the Minister of the Black Panther Party, who faced murder charges. In addition, funds run completely by local governments were created in an effort to curb overcrowding in jails.

Contemporary bail funds started with the creation of the Bronx Freedom Fund in 2007. The Northwest Community Bail Fund (NCBF) was created in 2016 out of St. Mark’s Episcopal Cathedral as a nonprofit organization advocating for bail reform. Finally, in 2018, NCBF separated from St Mark’s Cathedral as a separate non-profit.

The goal of NCBF is to minimize the harm of the cash bail system by paying bail for people who would otherwise spend the pretrial time in jail while awaiting routine court appearances. NCBF currently operates in King, Snohomish, and Pierce Counties in Washington State.

The unique thing about donating to any bail fund is that those funds are continually being recycled. When a defendant shows up to all of their court dates, NCBF is returned the money they paid to have them released. This allows that money to go back into the fund and be used again to free additional people stuck in jail pre-trial. (NCBF does not seek out clients who will more likely return to court, nor is there any pressure from NCBF to attend.) No money is wasted in helping someone return to their lives, but naturally sometimes bail is kept by the courts when there is a failure to appear.

In these situations, our Funds Recovery team focuses on having bail returned to us in these events. Years can go by while a defendant is meant to attend court, and there are many ways in which a case can be dismissed, delayed, or simply never brought to conclusion. As stated above, Washington State’s reasoning behind holding bail is to incentivize a defendant to attend court, not financial gain. So once there is no further need for this incentive, there is a chance to regain the funds NCBF used to bail someone out by going through the proper channels. In this way, NCBF works hard to put the incredible monetary support donated by our community to good use.

By donating to any bail fund, you are helping to release the pressure put on those who are stuck in jail simply because they cannot afford freedom. Tune in later this week for an in-depth dive into the harmful effects of pre-trial detention, and why paying bail is so important in disrupting the criminal legal system.