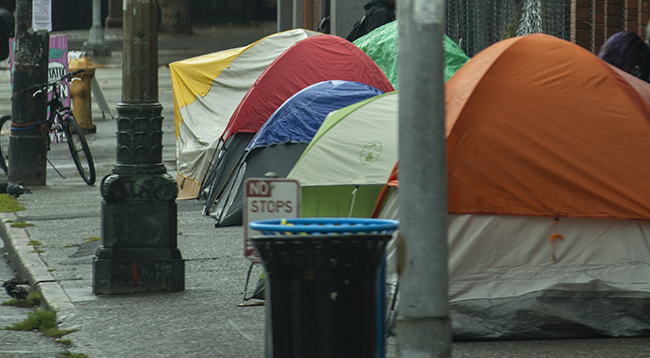 Across the country, cities are increasingly choosing to incorporate fines and arrests as part of the “solution” to the systemic issue of homelessness. Washington is no exception—in the past year a string of measures to ban overnight camping on city property were proposed across the Puget Sound region, all with elevated criminal charges and fines.

“Effectively what it does is make it a crime to be unsheltered and homeless,” says Breanne Schuster, a staff attorney for the ACLU of Washington.

Passed this March, Everett’s “No-Sit, No-Lie” ordinance prohibits sitting or lying down along the streets and sidewalks of a particular 10-block radius. A violation now results in a misdemeanor punishable by up to 90 days in jail, a fine of up to $500, or both. In April, the Auburn City Council upgraded its penalty for camping on city property from a $250 civil penalty to a misdemeanor, subject to fines of up to $1,000 and 90 days in jail. In a near-unanimous vote, Mercer Island passed a ban on camping on public property in February. But because of a 2018 decision by the U.S. 9th Circuit Court of Appeals, cities can only enforce the criminal penalty if adequate shelter space is available. (In Tacoma, the City Council has postponed consideration of reinstating a law to ban camping on city property given its lack of shelter space.)

Some officials justify the legislation as a way to connect those experiencing homelessness with additional services (in the current system, an individual charged with a criminal offense can be connected with mental health treatment, drug and alcohol programs, or help with housing, but would not receive those resources if convicted of a civil penalty), but insist the criminal penalty is a “worst-case scenario.” Others argue imposing fines and charging criminal offenses only compounds the real problem: how many people are unsheltered in our communities.

In Auburn, Councilmember Chris Stearns—who voted no on the measure—is among those who think a punitive approach will do more harm than good. “At the end of the day, the idea of putting a criminal threat over someone’s head is not going to address the cause of homelessness,” says Stearns in an interview with the Auburn Reporter.

If arrested, most people experiencing homelessness can’t pay their bail (or a potential fine of $150, let alone $1000) which will push them deeper into financial hardship and could increase the risk of jail time. Nearly every person convicted in a Washington court also receives a legal financial obligation (LFO) at sentencing for the fines, fees, costs, and restitution imposed by the court on top of a criminal sentence. Those who can’t afford to pay their LFOs immediately accumulate interest and collection fees, and may remain tied to the criminal justice system for years solely due to court system debts.

“Often, judges will disproportionately impose LFOs (disregarding Washington Supreme Court bench guides) without taking into consideration a person’s ability to pay, thus creating a more severe impact upon those who do not have the ability to pay and keeps them tied to the criminal punishment system,” says Chanel Rhymes, Director of Advocacy at Northwest Community Bail Fund (NCBF). “Those who are unable to pay their LFOs have difficulty obtaining jobs and housing. This perpetuates the inequity in our communities, which has a disproportionate impact on people of color and populations which are underserved, underrepresented, and vulnerable, adding to the poverty crisis.”

As of 2021, the National Inventory of Collateral Consequences of Conviction identifies more than 1,300 criminal record-related barriers to housing and residency ranging from background checks, denial of constitutional fair housing law protections, eviction and housing forfeiture, and denial of rental or sale.

Looking past longterm barriers, an arrest that results in jail time can put individuals experiencing homelessness back at square one. Without a strong support system, a person might lose belongings (including important documentation like their Social Security card or birth certificate), their spot at a shelter, or a case manager they’ve established a relationship with. NCBF is committed to helping prevent those outcomes by posting bail for those who cannot afford their freedom.

Advocacy groups are vocally pushing back against individual punishment for systemic failures. The Tacoma-Pierce County Coalition to End Homelessness spoke out against the Tacoma City Council’s proposal, calling instead for establishing enough shelter to meet immediate needs and creating permanent housing for all residents of Pierce County.

Johnathan Hemphill, a member of the Lived Experience Coalition (a group of current or formerly homeless advocates whose representatives hold leadership roles on King County’s Regional Homelessness Authority), doesn’t think a criminal penalty will encourage more people to accept services. He voiced concerns to Auburn officials that while they might consider the criminal penalty a worst-case scenario, the legislation might lead to further criminalization of homelessnes across the country. “Please heavily consider the fact that the ordinance you’re proposing may have a domino effect and may cause other cities to propose similar legislation without the lens you have.”

NCBF often sees people experiencing homelessness caught in the cycle of the criminal legal system, trapped between demands for payment they can’t possibly afford and the life-altering consequences of being unable to pay. We cannot hope to truly help people experiencing homelessness while criminalizing poverty—if city officials continue to implement policies that result in increased debt and lengthened criminal records, they will ultimately be putting up barriers to the services and solutions they claim they are trying to provide.