Municipal Courts: A Beginner’s Guide To A Flawed Judicial System 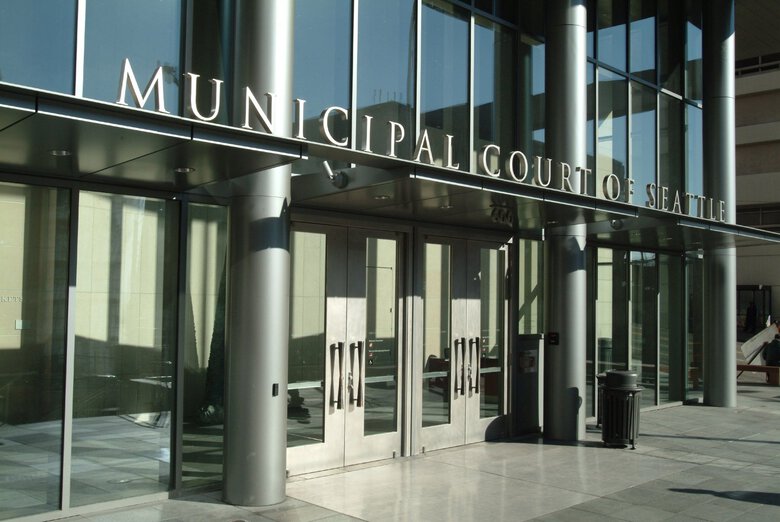 The criminal punishment system is complex. When you think about how long one may attend school to become a lawyer or judge, you can understand why the average citizen may not know much at all about how courts work on a local level, let alone a national level. The courts should exist to serve the people, but what happens when that ideal breaks down under the reality of the situation? When a system only exists to serve itself, at the expense of the people it processes, you may wonder what it’s there for. The unfortunate reality we live in is that at their best, municipal courts are an annoyance. At their worst, they perpetuate systems of inequality and are just one more way that our nation fails its most vulnerable populations.

A municipality is a city that has its own local government. Therefore, a municipal court is, in the simplest of terms, a court that processes the cases of that city or town. Any civil or criminal cases that occur within the boundaries of that city, up to a certain level, are settled in the municipal court. Common examples of these misdemeanors or infractions are: littering, prostitution, jaywalking, third degree theft, fourth degree assault, disturbing the peace, invalid driver’s license, walking an unleashed dog, etc. But being arrested for one of these crimes does not necessarily mean you would have to go to court. You may be released after arrest, but if you are booked, that means you must attend a hearing. 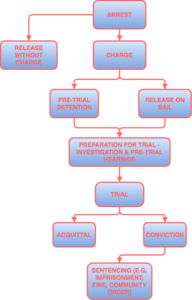 Depending on the charge, you may be detained and unable to leave without paying the bail set for your crime. If you are able to pay bail right then in cash, you can leave and return a few days later for your hearing, or initial appearance. But if you aren’t able to pay, you have to wait. And if at your hearing the judge sets your bail still too high to pay, you have to spend the weeks it will likely be before your trail is completed in jail. That is, if you plead innocent. Pleading guilty is an automatic sentence, but many people feel pressured to accept the guilty plea, even though they may not be guilty, in hopes that their prison time will be lessened.

But here’s the good news: if you plead innocent and are able to pay cash bail, you will get that bail money back after attending the set court dates. You’ll have to attend each hearing, which may be far from where you live, and you’ll have to take time off work/find childcare to do so, but eventually you may walk away with only a few hundred dollars in fines and your freedom. And sure, it may be several hundred dollars if you have to pay a bail bonds company to get you out, which you will have to pay on top of your court fees, and won’t get back even after your trial, but that’s what many people choose to do rather than spend weeks in jail they can’t afford. And the courts receive their bail money either way.

This is all important to make note of because, as with many municipal courts around the nation, Washington municipal courts are funded exclusively by the cities they serve. And some of those funds come from, you may be able to guess, the fees, fines, and bail money the court collects in the process.

And here’s the bad news: keeping people in jail is expensive. The 2019-2020 budget for King County adult and youth detention facilities (pre-trial holding) was $321,543,439. Six municipalities within King County collected fines and forfeitures totaling $12,800,838 in 2017, and these were only the municipalities with the highest amounts of fees collected. On its own, the budget for the Seattle municipal courts in 2020 was $34,859,056. Outwardly, this may look like a somewhat self-sustaining system. But many of the people greasing these wheels are the ones that have the least amount of capital to spare.

The national poverty rate is around 10%. But in prison, that percentage is multiplied times three. Poverty is one of the highest indicators of whether or not someone is likely to be booked, charged, and punished for a crime. For those who experience homelessness, that likelihood is even higher. In Seattle, one in five people booked into jails are experiencing homelessness. That’s multiple bookings per person for things as basic as a Failure to Appear in court. This comes as no surprise when one thinks about the kinds of crimes municipal courts punish, such as littering, trespassing, drinking in public, and disturbing the peace. The sad reality is that this vulnerable population, which already suffers from higher rates of untreated mental illness, drug addiction, and abuse, is punished disproportionately and systematically for their situation. Remembering that if one needs cash money to pay bail, reliable transportation to attend court dates, and additional funds to pay fees and fines if charged with a crime, how likely is it that these citizens will be able to remove themselves from the cycle of poverty? And how easy it would be for someone who is unemployed to go from housed to homeless after having gone through this process?

Unfortunately, this rings even more true for racial minorities. The total population of King County in 2019 was 2.252 million. Despite being only 7% of the total King County population, Black people made up 40% of individuals in being detained and 37% of incarcerated individuals. This means that they were seven times more likely to be detained/incarcerated than their White, Hispanic, and Latinx counterparts. Combined with the statistic that in 2018, Black households in King County were two times as likely to live under the poverty line, this doesn’t come as a surprise. And Black women, along with Hispanic women as you’ll see below, make the least out of everyone. 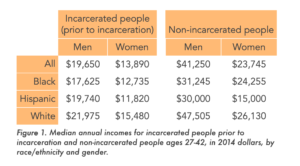 NCBF works every day to keep those who can’t afford bail out of jail so that they can continue to support themselves and their loved ones while they wait for their trial. It’s work we are proud to do, but wish we did not have to do. Our goals extend beyond simply keeping people afloat; abolition is, and should be, what we strive for.

Given that so many of those who must go through this process are harmed by it, this self-sustaining system looks more and more like a vicious cycle. If you fall below the poverty line, there’s a good chance you live in a more heavily patrolled neighborhood. With more police supervision, you are more likely to be booked by law enforcement for a misdemeanor or infraction. After being booked and held in custody, you may not be able to pay the arbitrary amount of cash set as your bail and will have to remain in custody until your court date, endangering your job and living situation. You may be able to pay bail with the help of a predatory bail bonds company, but it will cost your family more in the long run since you will not get that money back. Regardless, even if you are able to pay bail, but are not able to attend one of your possibly multiple court dates, the judge may issue a warrant for your arrest for failure to appear. Even if you do attend each court date, you may be hit with a heavy fine and prison time, further endangering your economic situation. And once out of prison, your likelihood of getting hired decreases, your chance of homelessness increases, and you become more likely to be booked once more by law enforcement.

The cycle of crime and punishment the municipal courts system perpetuates is made worse when we remember that the money the courts receive from bail, fees, and fines, goes to fund them.

“Would you have faith in the system if you knew that every single actor in the criminal justice system — including the judges, the district attorneys, the court-appointed lawyers — everybody relied upon a steady stream of guilty pleas and verdicts to fund the office?”

At NCBF, we are committed to holding these actors accountable. Our CourtWatch program, launched in 2020, seeks to expose the subjective nature of municipal court proceedings through observation and data collection. Our volunteers log on to virtual court rooms and monitor trends of what people in our region experience from the legal system. This kind of work is integral to changing the conversation around what we have all considered fair and just.

Everything is connected through the system we call “justice,” whether it’s cash bail, parking tickets, or the poverty line. Having the base knowledge to understand one aspect of this complicated system helps unravel other threads and see other patterns in other systems we often overlook or take for granted. Now that you understand how municipal courts work (and don’t work), we hope you’ll continue your advocacy journey with us as we explore other topics. What questions do you still have about municipal courts? How do you think we, as a society, can do better? Tweet us at @NWCBailFund.